This time, we head back into Gothic territory with a tale of cruelty and revenge set during the Franco-Prussian war, ‘The Lord of Chateau Noir’ from 1894.

You can read the short story here: https://www.arthur-conan-doyle.com/index.php?title=The_Lord_of_Ch%C3%A2teau_Noir

In late 1870, the Franco-Prussian War entered its second phase. The Empire of Napoleon III has been defeated and the French have declared a Third Republic and refused to capitulate to the Prussians. Paris is besieged and Northern France remains a battleground.

In the occupied Norman town of Les Andelys, Prussian sentries are regularly found dead, while foraging parties and patrols have disappeared. The nearby Chateau Noir seems to be central to these events and Captain Baumgarten is sent to investigate…

Conan Doyle was a student at Stonyhurst in the North West of England when the Franco-Prussian war broke out. He commented on the events of the war several times in letters to his mother.

The story was written in Spring 1894 (completed in May), as one of many occasional pieces for the Strand after the demise of Sherlock Holmes.

First published in the UK in the Strand Magazine, July 1894, with illustrations by William B. Wollen, the great Gerard illustrator. Printed alongside was ‘An Alpine Pass on Ski,’ Conan Doyle’s remembrance of a recent trip to Switzerland.

First published in the US in newspapers during July 1894.

Collected in The Green Flag and Other Stories of War and Sport (1900), alongside ‘A Shadow Before’ (1898) which also concerns the Franco-Prussian War.

The Franco-Prussian (or Franco-German) War, 19 July 1870 to 10 May 1871, came about as part of tensions for control and dominance of central Europe. Having secured victory of Austria in 1866, Prussian Chancellor Otto Von Bismarck took advantage of French concerns about a Hohenzollern on the Spanish throne to draw France into conflict.

The record of a meeting between the French ambassador and Kaiser (the Ems Telegram) was doctored to enrage French popular opinion, leading the Empire of Napoleon III to declare war on Prussia in July 1870. What was seen as French aggression led to the southern German states allying with Prussia.

The Prussian military moved swiftly and secured early victories. In August, the Battle of Wiessemburg took place, at which General Douay was killed, damaging national hopes. This is the battle at which Count Eustace’s son was captured in ‘The Lord of Chateau Noir.’ This was followed by the Battle of Sedan in early September at which Napoleon III and much of the French army was captured.

In Paris, a new Republic was formed and vowed to fight on. This second phase of the war saw the use of the levee en masse and francs tireurs (irregular forces) which feature in ‘The Lord of Chateau Noir.’

In the waning days of the war, with German victory all but assured, the German states proclaimed their union as the German Empire under the Prussian king Wilhelm I and Chancellor Bismarck.

While there were atrocities on both sides, the ‘slaughter narratives’ are increasingly questioned, with many historians noting that the irregular troops were perhaps less effective than often portrayed and the Prussian troops behaving consistently with the norms of 19thC warfare.

The story is set in and around Les Andelys in Normandy, which is situated between Rouen and Paris. The town has several connections to Conan Doyle’s family as identified by Alexis Barquin at the Arthur Conan Doyle Encyclopaedia: https://www.arthur-conan-doyle.com/index.php?title=Les_Andelys.

In Autumn 1870, Conan Doyle’s sister Annette was educated at St Clotilde, a boarding school for girls in Les Andelys, during the early stages of the war. Lottie attended the same school from 1881.

Conan Doyle visited the town several times, being hosted by Madame Ricard. See the link above for an interview with Madame Ricard from 1959. 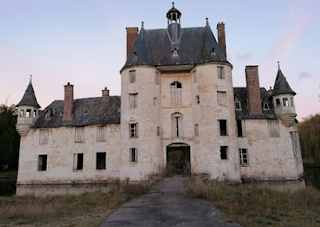 In addition to this tale, Les Andelys is referenced in three other Conan Doyle stories: there is a Seigneur d’Andelys in The White Company, Sainte-Marie in The Refugees is seigneur of the Chateau d’Andelys, and the Hussars of Conflans are camped just outside Les Andelys in 'The Marriage of the Brigadier.'

Given that Conan Doyle knew the area, there’s the intriguing possibility that Chateau Noir could be based on a real place. One candidate in Chateau de Pont-Saint-Pierre, a few miles north west of Les Andelys, which has been abandoned for much of the last fifty years. With its overhanging turrets and low arched door, it could be a proxy for Chateau Noir.

The writer most associated with the Franco-Prussian was is arguably Guy de Maupassant (1850-1893). His collection of short stories, Boule de Suif et Autres Contes de la Guerre (Dumpling and Other Stories of the War), c. 1880, is a classic and the title story, Boule de Suif, one of the best short stories written in any language.

Maupassant’s depiction of Prussian forces is almost entirely negative. They are shown to be dull and slow-witted, arrogant and, in the case of Boule de Suif, sexual predators. Other notable tales include Mademoiselle Fifi, about an effeminate German officer who abuses and is killed by a Jewish prostitute, and Deux Amis in which two friends debate the war before being captured and executed by the Prussians.

Conan Doyle read Maupassant and had a troubled relationship with his work. He poured praise on his essay ‘Le Roman’ in 1888 and said ‘Le Horla’ (1887) was the fourth greatest short story of all time (the first being Robert Louis Stevenson’s ‘The Pavillion on the Links’). However, he found Maupassant’s subject matter deeply uncomfortable, and in May 1894, at the time of writing ‘The Lord of Chateau Noir,’ wrote to his mother that ‘Zola and Maupassant and Gautier get beyond me.’

Nevertheless, in Through the Magic Door (1907), he claimed Maupassant was one of the greatest short story writers of all time, and second only to Edgar Allan Poe. High praise indeed from Conan Doyle.

Maupassant suffered from personal demons and developed an acute paranoia and fear of death which overtook him. He attempted suicide in 1892, was committed to an asylum and died of syphilis in 1893 (the same year as Conan Doyle’s father).

The Gothic and the Conte Cruel

The story appears to take inspiration and tone from the French conte cruel, Villiers de l'Isle-Adam. The movement takes its name from his Contes Cruels (1883, translated into English as Sardonic Tales by Hamish Miles in 1927).

There is more discussion of the Conte Cruel in Episode 6 – The Case of Lady Sannox.

‘A Shadow Before’ is a vignette, first published in 1898, in which a trader, John Worlington Dodds, deduces from the exorbitant prices paid for horses at an Irish auction that war between France and Germany is imminent. The story can be read here:  https://www.arthur-conan-doyle.com/index.php?title=A_Shadow_Before

It first appeared in Windsor Magazine in December 1898 and was collected alongside ‘The Lord of Chateau Noir’ in The Green Flag and Other Stories of War and Sport (1900).

There is a touch of foreshadowing of The Hound of the Baskervilles (1902) when Captain Baumgarten observes the similarities between generations of seigneurs of Chateau Noir ‘all men with hawk noses and bold, high features, so like each other that only the dress could distinguish the Crusader from the Cavalier of the Fronde.’

The Adventure of the Abbey Grange (1904)

The Adventure of the Speckled Band (1892)

The Adventure of the Blanched Soldier (1926)

The Retirement of Signor Lambert (1898)

A complete change of tone and pace with the light-hearted body-swap story, The Great Keinplatz Experiment (1885) which can be read here: https://www.arthur-conan-doyle.com/index.php?title=The_Great_Keinplatz_Experiment