“Give me a morning in Switzerland…”

“Give me a morning in Switzerland…”[1]

A review of ‘Sherlock Holmes, Arthur Conan Doyle and Switzerland’ by the Reichenbach Irregulars (RBI, 2021)

The Reichenbach Irregulars of Switzerland are a little over thirty years old but their contribution to Sherlockian scholarship far outweighs their longevity. Now, in the pages of ‘Sherlock Holmes, Arthur Conan Doyle and Switzerland,’ those of us who missed out on their many conferences and events can partake in the highlights. At first, one may be forgiven for wondering whether a volume could be filled. After all, Conan Doyle only visited on three brief occasions and the references to the country in his works are fleeting. But Sherlockians and Doyleans are nothing if not inventive and, as this welcome volume proves, there is much to educate, inform and entertain from what may initially suppose is scant source material.

The volume opens with a warm introduction from Peter Blau whose description of his visit to Château du Lucens in 1966 is enough to make the most mild-mannered Doylean green with envy. Addressing a later moment from the Conan Doyle family’s relationship with Switzerland, the piece provides a coda on a story we will explore in detail over the next 100 pages.

Our journey begins with the Sherlockian connections and a well-mannered disagreement between three scholars on Holmes’ escape from the Reichenbach Falls. Eva Zenk Iggland deserves credit for establishing that Holmes would have secured the help of Melchior Anderegg, the leading Alpine guide, whose fascinating life is outlined in her chapter. Guy Marriott, with trusty Baedecker in hand, explores the likely equipment and routes, settling on the Susten Pass to Wassen, and thence the train to the Italian border. While Bryan Stone takes us back to the clues in the text to propose a third, equally plausible direction of escape. 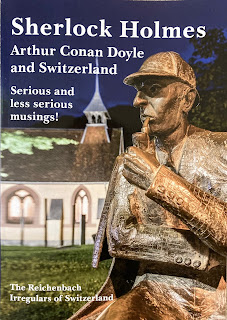 Whichever path you choose, the destination is the same and one arrives at ‘The Florentine Sherlock’ by Enrico Solito. Drawing on the history of the period, Solito makes the case that, in Holmes’ description of the Great Hiatus, contemporary readers would have found evidence that our man was working undercover for the British government. Solito describes the febrile atmosphere of Florence in the post-Risorgimento years and finds much that would have occupied Holmes as a spy. Catherine Cooke takes us even further into the Hiatus with a trip to Tibet through the fascinating account of Swedish explorer Sven Hedin, a proxy or inspiration for the Norwegian Sigerson. In a richly illustrated piece, Cooke deftly walks the tightrope between Sherlockian and Doylean scholarship.

Sherlock Holmes himself would be pleased by the next batch of articles which live by his method “upon the observation of trifles.” Marina Stajić draws on Baring-Gould’s biography to make a startling assertion about the identity of Sherlock’s teenage love (I will not spoil the revelation here). Reinhard Hillich takes us down a delightful side-alley, from Holmes’ racing-engine mind to that of a Swiss alternate, Sergeant Studer. I must confess to not having encountered Friedrich Glauser’s Studer before, but a volume in translation has been ordered. Stajić returns with a piece on Baden – or is that Baden-Baden? – in ‘The Disappearance of Lady Frances Carfax,’ which provides a rich description of the setting of this oft-overlooked story. We round out this section with the story behind the famous plaque outside the Reichenbach Falls funicular railway, replete with biographies of the interesting personages involved, from the pen of Julie McKuras. 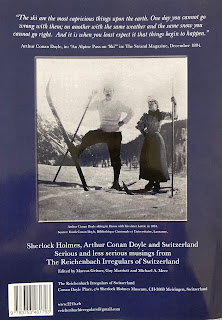 The second half of the volume is dominated by contributions that delve into matters Doylean, and it is here that readers of this blog will find much to occupy them. Marcus Geisser lays solid foundations with ‘Adventures and Amusements in Alpine Heights,’ a comprehensive study of Conan Doyle’s visits to Switzerland as student, writer and spiritualist. Drawing extensively on local newspapers and other reports that have drawn scant attention, Geisser fleshes out Conan Doyle’s itineraries with connections to his literary work, bringing much clarity and depth to the author’s visits to the country. This is followed by Michael Meer’s excellent ‘”It is, indeed, a fearful place”: On Conan Doyle and Switzerland’ in which he wanders the rich literary and cultural hinterland which shaped the author, from Maupassant’s L’Auberge (1886), which Conan Doyle references in Through the Magic Door (1907), to Alexandre Dumas and Robert Southey, and ultimately making a compelling case for Conan Doyle’s predisposition towards a waterfall as Sherlock Holmes’ resting place.

The Doylean material continues with an insightful piece from Jon Lellenberg and Daniel Stashower on The Stark Munro Letters, penned by Conan Doyle in Switzerland in winter 1893. Their primary innovation is to compare Munro with the earlier lost/re-written story The Narrative of John Smith, both very personal but separated by a decade of lived experience for the author. While Conan Doyle’s coming of age as a writer is clearly evidenced, the two novels also reveal the rapid pace of social change, such that the musings of Smith-Munro could be regarded as invective in 1883 but banal ten years later. The article succeeds in improving on Frederick Kittle’s 1982 afterword on the novel (no mean feat), and thus the piece is a suitable late contribution to Doylean scholarship from Lellenberg who passed away earlier this year.

The tone takes a pleasing ‘about turn’ with Clifford Goldfarb’s ‘The Brigadier in Switzerland: Travels with Arthur and Napoleon’ which surveys the writing and publication of the Gerard stories, and Conan Doyle’s fascination with the Napoleonic era, which we covered with Goldfarb as guest in Episode 12. Goldfarb poses the question: why didn’t Conan Doyle set a Gerard tale in Switzerland, given its significance in the Napoleonic era? In fact, Switzerland does make a sly appearance in ‘How the Brigadier Held the King’ (“When one has served from the affair of Zurich to that last fatal day of Waterloo…”) but this tale has yet to surface and no doubt languishes in a battered leather dispatch satchel in the cellar of a Parisian café, somewhere off the Rue de Rivoli. In place, Goldfarb offers his own take, ‘How the Brigadier Came to Reichenbach,’ in which he ingeniously weaves moments from previous tales to tell a pleasing new story.

Fittingly, the last article is Marcus Geisser’s ‘The Final Return’ which tells the important story of Conan Doyle’s decision to resurrect Sherlock Holmes in ‘The Empty House,’ the content of which inspires so much of this volume Piecing together Conan Doyle’s correspondence and the Strand’s account of the Dent Blanche incident, identified by Richard Lancelyn Green as a primary source, Geisser makes an important contribution to the scholarship of this pivotal moment in Conan Doyle’s literary career.

The volume concludes with a warm afterword from Akane Higashiyama and Mitch Higurashi of the Japan Sherlock Holmes Society which brings us back to the camaraderie and sociability of Sherlockians highlighted in Blau’s introduction. And while as readers we cannot share in the fraternity of the RBI in quite the same way, this elegant, scholarly volume is a very close substitute. Little did this reviewer think there was more to say on the scholarship of Conan Doyle and Switzerland than has previously been said, but one is pleased to be disproved. To paraphrase the immortal words of Mr Barnes in ‘Wisteria Lodge,’ “I see there was more than a little over.”

A copy of 'Sherlock Holmes, Arthur Conan Doyle and Switzerland' can be purchased by emailing reichenbachirregulars@gmail.com.