Doings of Doyle on I Hear of Sherlock Everywhere 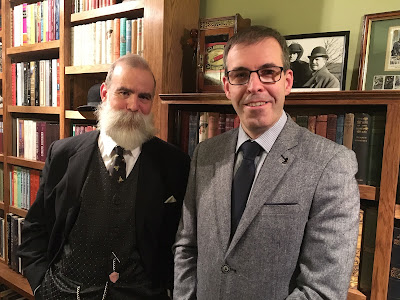 If you are interested at all in Sherlock Holmes - and we assume you are - you will no doubt have encountered I Hear of Sherlock Everywhere. A collaboration between Scott Monty and Burt Wolder, IHOSE began transmission in 2007 and the chaps have almost 200 episodes under their belt. A fusion of interviews, commentary and friendship, the podcast lifts the lid on all aspects of Sherlockiana. Not content with their regular show, Scott and Burt launched sister podcast Trifles in 2017 which explores the minutiae of the Sherlock Holmes canon and they've already chalked up 180+ shows.

We were delighted to be asked to appear on a recent episode of IHOSE to talk about Doings of Doyle. Unfortunately, Paul was unable to join Scott and Burt and so it was a solo outing for Mark. It was great fun - a wide-ranging discussion that touched on almost every aspect of Conan Doyle's life and work. We'd like to thank Scott and Burt for having them on and doff out caps to their sterling work. IHOSE is truly the grand-daddy of Sherlockian and Doylean podcasts!

Listen to Doings of Doyle on I Hear of Sherlock Everywhere.
News