The Captain of the Pole-star is a gothic tale, penned by Conan Doyle in 1883 and frequently reprinted throughout his life. It is the claustrophobic story of an arctic voyage and the fate of its titular Captain. If you want to avoid spoilers, we recommend you read the story here (https://www.arthur-conan-doyle.com/index.php/The_Captain_of_the_%22Pole-Star%22).

The Pole-star is a whaling ship, operating late into the Arctic season. Its crew is restive, its captain certain there are whales still to be found. But time is running short, and the ice is closing in.

The story is narrated via the journal of the ship’s young doctor, John McAllister Ray, who charts the vagaries of the weather and the surrounding environment, the moods of the crew, and the erratic mental state of Captain Nicholas Craigie, an experienced whaler who appears to be on the brink of incipient breakdown.

The encroaching ice and unpredictable commander are not the crew’s only concerns: the Pole-star also appears to be haunted. Since leaving Shetland, it has been followed by eerie cries and an occasionally glimpsed presence, a presence which seems closely linked to Captain Craigie.

Trapped in a beautiful but deadly environment, with an unstable captain in the grip of mysterious forces, the doctor and crew can do little but watch, wait and react to events as they unfold. 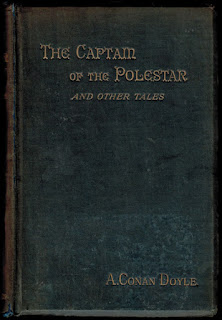