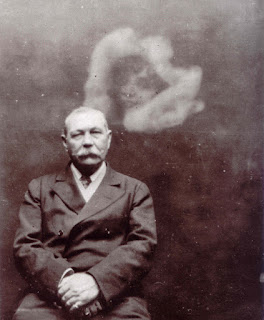 If you haven’t already guessed, Doyle holds an endless fascination for me. When asked why this was the case recently, I came up with the off the cuff response that he was full of contradictions. At the time, I was thinking mainly about the obvious one – how the man who created Sherlock Holmes could be taken in by the Cottingley Fairies – but having considered my answer further, I think there are three tensions that colour Doyle’s life and work.

Though a public figure, Doyle was an intensely private man. He carefully cultivated his public image, honing the story of his life in the telling and retelling. Memories and Adventures is a consciously crafted version of events, often at odds with documentary evidence. Of his father's alcoholism and other close relationships, he is purposefully vague. And yet, like all writers, he periodically draws on his past in many of his works, whether his time on an arctic whaler in The Captain of the Pole-star or his medical cases in Round the Red Lamp. In The Stark Munro Letters, he goes one step further, drawing heavily on his early life in practice. Doyle's selective editing of The Stark Munro Letters over various versions suggests he may worried he had revealed too much. Whatever the truth, for all his larger than life persona, there's always something inherently unknowable about Doyle.

Doyle was caught between the lure of the romantic and the scientific. He was brought up on the sweeping historical romances that were a favourite of his mother and which consequently informed his notion of what great and 'worthy' literature is. He aped this work early on, while also delving into the fantastical and ghoulish, the mysterious and unexplained. And yet, he was of a scientific mind, he studied medicine and left Edinburgh an arch materialist. He applied logic and reason to real cases and fictional. In his championing of spiritualism, he sought to blend the two, arguing (at first) that scientific enquiry would eventually prove the existence of the spirit world. While Doyle did not see science and religion as fundamentally incompatible, he walked the line between the two, straying one side then the other, throughout his life.

Shortly before his death, Doyle lamented that he was known as the author of the Sherlock Holmes stories and never as the author of The White Company of Micah Clarke. Doyle always felt somewhat cheapened by his detective fiction, though it was what made his career, reputationally and financially. Doyle saw his other work as higher art. Perhaps that view was reinforced by its relative lack of financial success (in comparison to his Holmes stories – by most authors standards, his other work was lucrative). He explores the theme of writing for money versus writing for art in his 1891 work The Doings of Raffles Haw To today’s readers, Doyle’s dismissal of his Sherlock Holmes stories is perhaps the greatest mystery of all.

These are tensions that reappear throughout Doyle’s work. We’ll be picking up these themes in future podcasts.