You can read the short story here: https://www.arthur-conan-doyle.com/index.php?title=The_Adventure_of_the_Resident_Patient

Or listen to an audio narration by Greg Wagland here: https://www.youtube.com/watch?v=dGi_BCaTYMo

The episode can be heard here:

It is an autumnal evening in the early 1880s, and Sherlock Holmes and Doctor Watson have just returned from an evening constitutional around central London. They find Dr Percy Trevelyan waiting for them with a strange story about his benefactor and resident patient, Mr Blessington. Having set Trevelyan up in a prestigious practice in Brook Street, the well-regulated Blessington has recently become a nervous wreck, a prey to exaggerated fears of burglary. And now there is evidence that the inner sanctum of his living quarters has been visited by strangers whilst he was absent. Thus Trevelyan has been sent to lay the matter before Sherlock Holmes. Perhaps the key to the mystery could lie with the recent visit of two Russian noblemen to Brook Street… 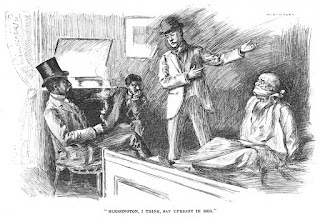 The story was written around January 1893, as one of the later entries of the collection that would become known as The Memoirs of Sherlock Holmes.

First appeared in The Strand Magazine in August 1893. When it appeared in Harper's Magazine in the USA, the first page of the story had an illustration which revealed what happened to Blessington.

First collected in The Memoirs of Sherlock Holmes in December 1893.

In early 1885, Conan Doyle met Louise Hawkins, who would become his first wife. Her brother, John (sometimes Jack), became seriously ill with cerebral meningitis. Conan Doyle took him in as a resident patient. His stay was short-lived: Jack died on 25 March 1885.

In The Stark Munro Letters (1895), Conan Doyle wrote a semi-autobiographical version of the story which reveals that the eponymous Munro came under police scrutiny for the boy’s death. This may have happened to Conan Doyle too, as there is an oblique reference to the event in his autobiography, Memories and Adventures (1924).

Adam Worth as possible inspiration for Blessington 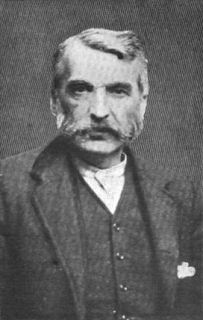 Adam Worth (1844-1902, https://en.wikipedia.org/wiki/Adam_Worth) was an American criminal, widely considered to be the inspiration for Professor Moriarty. In October 1892, Worth was arrested for a bodged robbery in Liege, Belgium. The story was in the newspapers around the time Conan Doyle wrote ‘The Adventure of the Resident Patient.’

Worth’s name is referenced in Blessington/Sutton’s gang, the Worthington bank gang, while Dr Percy Trevelyan was in receipt of the Bruce Pinkerton prize, perhaps a reference to the Pinkerton Agency which pursued Worth for decades. Worth was convicted in Liege on account of another gang member who turned Queen’s evidence, as did Blessington in the story.

For more information, see Ben Macintyre, The Napoleon of Crime: The Life and Times of Adam Worth, Master Thief (1997). 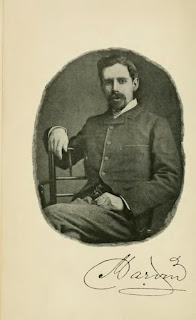 Russia was the great ‘bogeyman’ in British popular culture at the time of the story when the Great Game was at its height. Conan Doyle was greatly interested in the Great Game, having considered serving in the volunteer medical corps during the Russo-Turkish war. It was at this time that he may have heard of the case of Charles Thomas Marvin (pictured), a journalist working in the Foreign Office, who leaked details of a secret treaty. The incident may have influenced the writing of another Sherlock Holmes memoir, ‘The Adventure of the Naval Treaty.’ See Mark Jones, ‘Charles Thomas Marvin, the Foreign Office and the Naval Treaty’ in Baker Street Journal, Summer 2021, Vol. 71, No. 2.

A possible influence on the Russian émigré plotline is Felix Volkhovski, a Russian radical who served as intermediary between the anarchists and nihilists in Russia and sympathetic western Europeans. Conan Doyle chaired a meeting of the Upper Norwood Literary and Scientific Society on 25 January 1885, around the time of writing ‘The Resident Patient’, at which Volkhovski presented. Volkhovskie was a member of the Autonomie Club, “London’s only murder club”, which had hosted a visit from Vera Sassulitch, who attempted to kill General Trepoff, as discussed in Episode 9. See Dundee Evening Post, 3 September 1900. 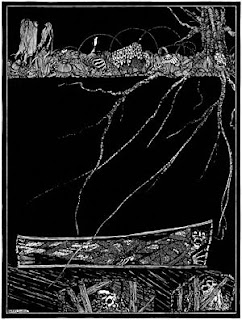 Catalepsy was a horror and/or fascination for one of Conan Doyle’s favourite authors, Edgar Allan Poe (1809-1849, https://en.wikipedia.org/wiki/Edgar_Allan_Poe), who made significant use of the condition in three short stories: ‘Berenice’ (1835), ‘The Premature Burial’ (1844), and ‘The Fall of the House of Usher’ (1839). Though the latter is the most famous, ‘The Premature Burial’ opens with a lengthy description of cases of catalepsy to create the verisimilitude Poe was seeking.

For his description of catalepsy, Conan Doyle may have mined the work of pioneering clinical neurologist, Sir William Gowers (1845-1915), the author of Manual of Diseases of the Nervous System (1886, 1888) which is commonly referred to as “the Bible of neurology.” See Andrew J. Lees,  ‘The Strange Case of Dr William Gowers and Mr Sherlock Holmes’ in Journal of Neurology, 2015. https://academic.oup.com/brain/article/138/7/2103/254909

‘The Adventure of Wisteria Lodge’ (1908), https://www.arthur-conan-doyle.com/index.php?title=The_Adventure_of_Wisteria_Lodge

‘The Adventure of the Naval Treaty’ (1893), https://www.arthur-conan-doyle.com/index.php?title=The_Adventure_of_the_Naval_Treaty

We return with Conan Doyle to his native Edinburgh with The Silver Mirror (1908). A celebrated ghost story, just in time for Halloween… You can read it here: https://www.arthur-conan-doyle.com/index.php?title=The_Silver_Mirror

Sherlock Holmes Show notes The Adventure of the Resident Patient