‘The Adventure of the Devil’s Foot,’ the third story in the Sherlock Holmes collection His Last Bow, was first published by The Strand Magazine in 1910. A tale of death and diablerie in Cornwall, it harks back to some of Conan Doyle’s earlier works.

You can read the short story here: https://www.arthur-conan-doyle.com/index.php?title=The_Adventure_of_the_Devil%27s_Foot 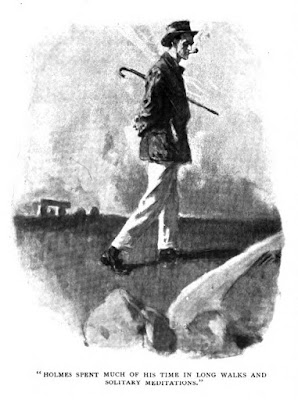 It is spring 1897 and Sherlock Holmes has been ordered by Harley Street specialist Dr Moore Agar to take some time away from his workload or suffer the inevitable medical consequences. Grudgingly, Holmes takes a rest cure in Cornwall, accompanied by Dr Watson. His recovery, however, is interrupted by a mysterious and unsettling tragedy in a nearby property occupied by the Tregennis family. Brenda Tregennis has been found dead, and two of her brothers, Owen and George, have gone mad overnight. The faces of all three are marked by a look of horror. The third brother, Mortimer, who lodges with the local vicar, left the house before the terrifying visitation, but he too is later found dead under similar circumstances to his sister. Holmes’s only lead in these singular events are provided by a strange powder, and the presence in the neighbourhood of the celebrated Explorer and lion-hunter, Dr Leon Sterndale…

A trip to the court of Louis XIV then over the Atlantic to North America in Conan Doyle’s 1893 novel, The Refugees. Read it here: https://www.arthur-conan-doyle.com/index.php?title=The_Refugees

Sherlock Holmes Show notes The Adventure of the Devil's Foot