Whither the Doings of Doyle? 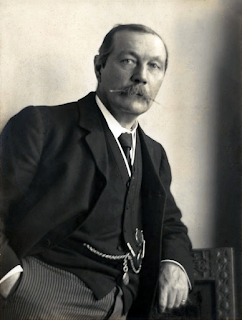 Why produce a podcast dedicated to the work of Sir Arthur Conan Doyle? That's the question any sound-minded individual must think when chancing upon Doings of Doyle. It's a straightforward question that deserves an equally straightforward answer:

It must seem a peculiar thing to say about a writer who is known the world over and whose most famous works are enjoyed by millions to this day. While the writings of many of his contemporaries have faded from life, Doyle's Sherlock Holmes stories - and their protagonists - have achieved immortality. They live on in re-issues, adaptations and in popular memory, a story of camaraderie and adventure in a world where its always 1895.

The overpowering brilliance of the Sherlock Holmes stories - and they are unquestionably brilliant - has nevertheless cast a great shadow (sic) over Doyle's wider work. So compelling are the stories, so beguiling the main characters that one can barely see anything else through the light they cast. Even works that were popular and influential at the time, such as The Lost World or The Exploits of Gerard, are largely forgotten today.

In fact, Sherlock Holmes and Doctor Watson are so commanding a presence in the popular imagination that they have relegated their creator to a back-seat role. As Sherlockians, we delight in playing The Game in which we recognise Dr Watson as the true author of (the majority of) the canon while Doyle is merely 'the Literary Agent.' Was there ever a more literal example of Barthes' 'Death of the Author'?

So why does all this matter?

It matters because Doyle was more than just the preeminent detective fiction writer of his age. He was a hugely influential author and public figure. The number of authors who have claimed inspiration from Doyle, whether contemporaries like P. G. Wodehouse or modern authors like George Macdonald Fraser or John Le Carre, has yet to be calculated. It is most likely an impossible task.

Doyle’s reputation has seen a partial restoration in recent years as more attention has been paid to his gothic fiction. Doyle is increasingly credited as a great genre-writer . But don’t suppose that this is warm acclaim: the term 'genre writer' is all too often used pejoratively to separate lesser works from 'proper' literature. Doyle isn't an acknowledged member of the pantheon of great writers. He doesn't even get a footnote in John Sutherland's A Short History of Literature (he's in good company - neither does Stevenson).

Doyle is certainly a great genre-writer, but to see him purely in these terms is to underestimate his skill and inventiveness. His vast oeuvre shows a command of almost all contemporary genres: historical, romance, detective, gothic, sporting - the list goes on. But Doyle is not limited by the boundaries we typically apply to genre fiction. His work shows a remarkable reluctance to conform to type, with many works being mash-ups of different styles to tell the story. Perhaps ‘genre-bender’ is a better term.

What shines through is the quality of Doyle's storytelling. No matter what the subject, the setting or the premise, Doyle has an unerring ability to carry his audience with him. We sit enthralled and enraptured by every twist and turn. As with any author, he has his highs and his lows, and perhaps here the sheer volume of his output is against him, but his storytelling always wins through. It's for good reason that Daniel Stashower's biography of Doyle is Teller of Tales.

Fortunately, Doyle may be about to see a long overdue revival. The recent Oxford World's Classics edition of Gothic Tales edited by Darryl Jones and the exciting announcement of a new Edinburgh edition of collected works, plus volumes on everything from Doyle’s legal work to his spiritualism, suggest his star may be on the rise once more. If indeed this is so, we hope this podcast helps speed it on its way.